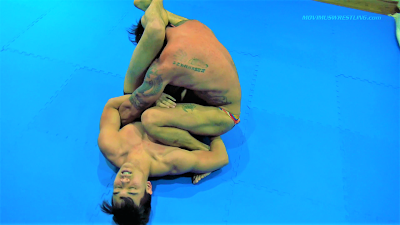 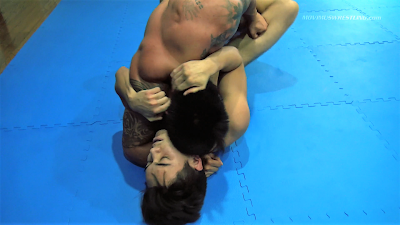 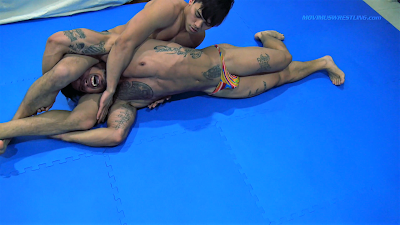 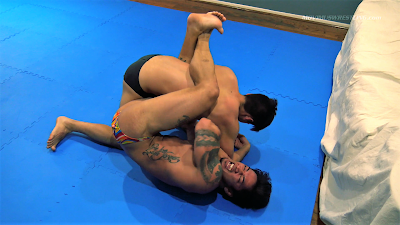 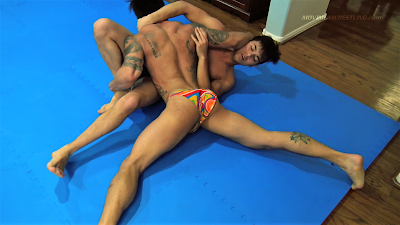 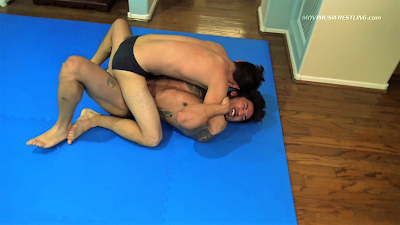 Duncan vs Turner is the best of Movimus's Vegas matches I've seen so far, intense, vigorous, and captivating, with evenly paired opponents who are worlds apart in mat strategy and personality. Evan Turner (in basic black) is pure business, taciturn and methodical. He takes the game seriously, and his performance is distinguished by his patience and resilience, along with chess-like deliberation. In his Movimus debut, Shawn Duncan (brashly tattooed, his trunks in swirling jawbreaker colors) is something of a wild card, aggressive and unconventional, whose approach to submission wrestling (though not lacking in technique) derives mostly from his passion for roughhouse. These wiry guys are surprisingly strong.

Eight minutes before the conclusion of the 25-minute (three-fall) contest, the wrestlers are tied 1 to 1. That last eight minutes is everything I could hope it to be, as both Shawn and Evan are well aware of the stakes and up their games accordingly. The guys buckle down to the business of winning, heaving their hearts and souls into every move. Nerves of steel underlie the turbulent give and take. Amazingly, the fight is both sportsmanlike and fierce. It's one of the best things to happen at Movimus so far this year. I want a rematch ... and soon.