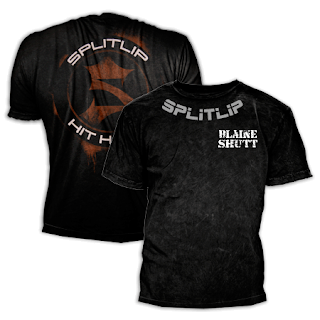 This is what comes of being nice to pushy, grasping twenty-year-old punks who know how to knock a man out. They demand that you buy their merchandise. "Hey my new shirt came out," he says, "you going to buy one!!!!" All his punctuation saved till the end. Not a request, but a command. "He" is one of my favorite cage fighters I know personally. I don't like to obey, but, as I told you, the guy knows how to knock someone out cold. He once asked point blank if I could take a "bump." Probably not, not one of his sadistic chops, anyway.

"And should help me sell em!!" he adds, in a sketchy version of the imperative mood. (I don't ask for pity, but try to imagine what hell it is sometimes to be an English teacher.) He makes the suggestion that I make his new T-shirt the subject of a blog. At least, this time he frames the request in the form of a question. That's practically well-mannered.

You know him, probably, by another name at Rock Hard, BG East, and UCW-Wrestling, but it's not a good idea to mix gimmicks and personae on this blog, which in the larger fight world has a bad reputation (that I'm nonetheless rather proud of). He doesn't mind if you put two and two together on your own. "Just say I'm one of your favorite cage fighters you know personally," he tells me. You might remember that I did say that.

If interested, and I would suggest that you probably ought to be, go to Splitlip Fightwear, click on the "Fighter Shop" tab up top, and look for "Blaine Shutt" ten rows down. Or you can just click on the picture above. The link should work.

"And don't be afraid to buy more then one!!!" Or first one, then more. Or more than one. Either way.
Email Post
Labels: Blaine Shutt Shameless Plugs

Caught in a Trap