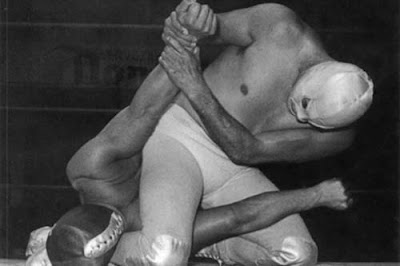 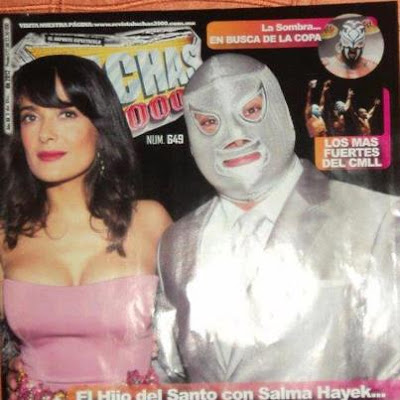 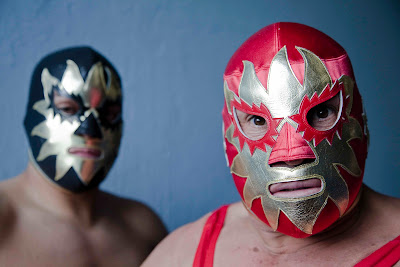 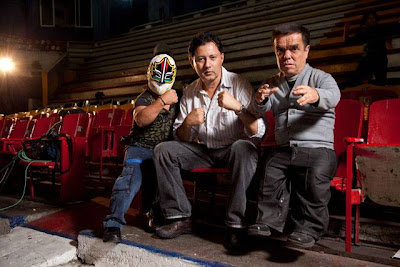 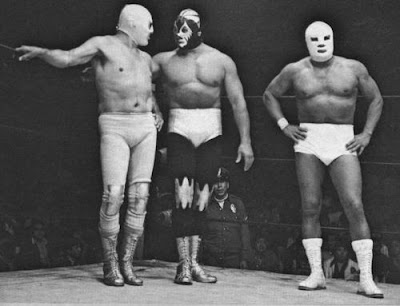 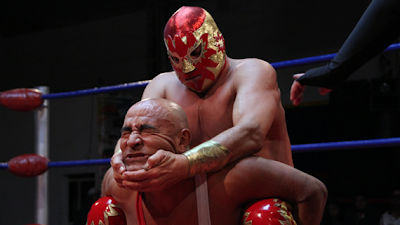 Once, the great Mexican wrestler El Santo went to a show, only to discover that the promoter was broke and that Santo was going to be the only wrestler to get paid, the rest of the luchadors getting only sandwiches for their work. Santo insisted that his own fee be divided equally among all the other wrestlers and told the promoter to pay him the next time he saw him. Santo's funeral in 1984 is still distinguished as one of the largest in Mexico's history, with thousands of mourners crowding the streets of Mexico City.

Last month PBS released Tales of Masked Men: A Journey through Lucha Libre on DVD. The program, written, directed, and produced by Carlos Avila, originally aired on September 28th. One of the interviewees in the film remarks matter-of-factly that Italy has grand opera and Mexico has lucha libre. The people who clogged the streets for Santo's funeral procession represent the influence of the spectacle on Mexican culture and the special bond between fans and wrestlers. Someone remarks that soccer would still be soccer even if played without an audience. But without the audience and the special interplay among fans and wrestlers and referees, lucha libre would be nothing.

The 55-minute documentary is shot in typical PBS documentary style--lots of talking heads (luchadors, friends of luchadors, sociologists, artists), interspersed with archival footage and bright, colorful snatches of contemporary lucha shows in Baja California and Mexico City. Of course, I would prefer longer scenes of the wrestling, but what we get is enticing, sensuous, and instructive. This is not a program designed for wrestling fans, much less gay wrestling fans like me, but it captures and condenses the spirit of the enmascarados and stays true to lucha's working-class mestizo roots and even touches on the eroticism of the physicality of pro wrestling, as well as its religion-inflected mysticism and political context.

The film mainly focuses on three areas--the history of lucha libre, with special attention to the spectacular career of Santo (Rodolfo Guzman Huerta, 1917-1984); the role of personcitas (little people) in lucha, respectfully considering their place in lucha's history and even, though only in passing, their special aptitude for ring-style wrestling, centering mainly on the career of Mascarita Sagrada; and the present and future of the spectacle, presenting Solar and his son Solar Jr. as examples.

For whatever reasons, I found the film very moving, as wrestlers tenderly paid tribute to the wrestlers who had trained them, as children crowded around Mascarita Sagrada adoringly, as father passed on his mask and ring identity down to son, as the camera captures the gaudy glamor of a wrestling show often in contrast to its stark, even squalid surroundings. Designed especially for an audience who have little or no appreciation for live wrestling, the film worked remarkably well for this fan, as well. Most of its information is stuff I already knew, but it's beautifully assembled here and packs more emotional punch than I had expected.