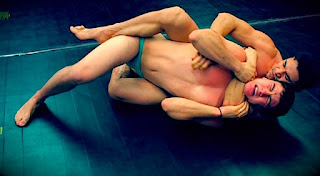 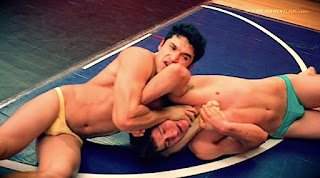 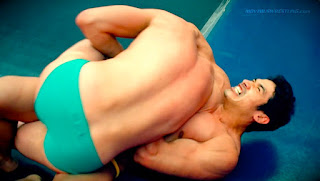 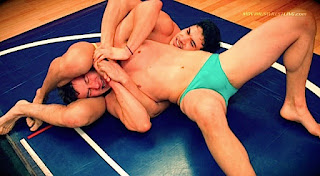 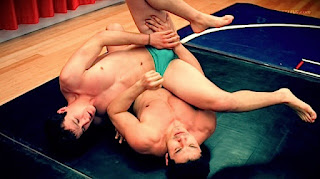 Elsewhere I have noted Aron's narrow range of expression. Probably more than once I have referred to his unreadable deadpan face. On the few brief occasions I have seen him in the flesh, I can count the number of emotions I have detected. That number is one. And I can't really call it an emotion so much as a manner: Standoffish.

All of that changes when Aron is on the mat wrestling. There he is the man of a thousand faces and a thousand different grunts, moans, exclamations, whimpers, come-ons, and mumbled curses. He is a good example of a man who comes to life only while wrestling.

Movimus's latest release gives us Aron (6'1", 179#) taking on Julio (5'9", 172#) one more time. Their first run-in was a year ago this month. The new match is better than the first, more suspenseful, more intense, no doubt because now the two wrestlers have some history. And both have killer headscissors, strong and tight enough to squeeze out a panicked submission in seconds.

The challenge is to steer clear of those legs. Julio and Aron form a near-constant tangle of arms and legs, with the camera gracefully weaving in and out and around. The first tap-out occurs early, a mere minute or two into the contest. It takes another 17 minutes or so for the second submission to tie up the count. The last four minutes decides the victor.

The pace of this match cannot be improved upon. Both men give it their all, no monkey business, no face-saving wisecracks. They hunker down for the long haul, all business, determined to win, respectful of the other man's abilities, but confident too in their own. It is a close to perfect fight, which may mean that 2016 is shaping up into a great year for Movimus and its fans.