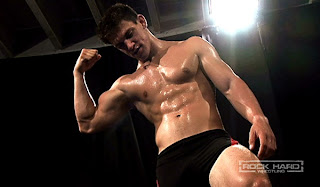 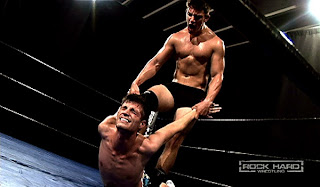 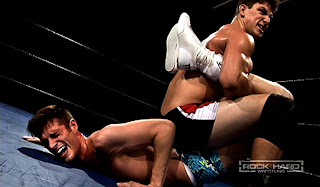 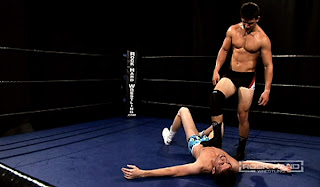 At Neverland, Bard has already noted the high technical quality of the fights you see at Rock Hard Wrestling.  The picture is practically if not fully Blu Ray quality.  The lighting catches every bead of sweat on the wrestlers' toned bodies, and the camera catches almost every move from the optimal angle and proximity to yank us viewers into the action.  Bard also notes that the video clarity and brilliance sometimes clash with the combatants' inexperience in wrestling as a sport or in pro wrestling as theatrical entertainment, noting that the consistently handsome athletes (all of them looking mere months past high-school glory in one sport or other) "often ham-handedly [pull] punches."

I won't try to repeat Bard's prescription for how to further RHW's steady technical and choreographic improvements over the past year, except to say that I agree.  Bard has also well dissected the allure of Cody Nelson, the intended subject of this posting, at one point a few months ago rightly considering him for the honored designation as non-homoerotic wrestler of the month.  Bard notes the particular charms of Nelson's ass and nipples--whereas most other viewers, I suspect, would rhapsodize over the young man's abs (which are quite worth the rhapsody, yes).  Abs are too obvious a point of reference for somebody like Bard ... or for me, who am taken principally with his honey-colored triceps and shoulders and the soft, enticing convexity just below his navel (okay, that's basically under the heading of abs, but please, people, respect my eagle's-eye precision).

But before I delve further into Nelson (I only wish), I would also like to throw in another against-the-grain observation and muddy the waters a bit (to mix metaphors) about the value of sharp, almost 3-D videography.  First, I like it a lot.  Now that I have watched a few of my favorite Hollywood films in Blu Ray format, I am sold on hi-def technology, in most cases experiencing the odd sensation that I had never really seen the films before--or, weirder still, that somehow James Stewart and Donna Reed had been exhumed, rejuvenated, and put through their Wonderful Life paces again for a remake rather than a restoration of their Christmas classic.  However much I would hate to abandon the poignant vivacity of hi-def video, some part of me still is nostalgically drawn to the dusky, garishly lit, and rather murky tone of old kink wrestling videos on VHS tape.  In that respect, perhaps I have unwittingly become like Blanche DuBois, convinced that throwing a red scarf over a lamp, to dim and obscure its piercing revelation of harsh reality, will somehow reprise "magic," which I take Blanche to mean her own lost youth.  That said, though, it would hardly be worth it to turn our backs on the new technology, so vastly superior is it, and to do so would be as affected (and yet interesting, perhaps) as making a silent black-and-white horror movie in 2011, accompanied only by the "mighty Wurlitzer organ" and some shaky in-camera special effects.
But back to Cody Nelson.   Speaking of nostalgia, he looks like the high-school jocks I remember from the early 1970s at Christian high school.  His hawklike nose, high cheekbones, and square-cut jawline.  And classic musculature that looks less gym-built than shaped by participation in three or four different sports in school and summer jobs on a Western dude ranch.  The only drawback I find in him is his habit, early in the match, of smirking, as if to imply that he is somehow above and beyond the drama of the fight he enacts, only an ironic participant in a pageant old guys and pencil-necked geeks make too much of.  As the fight progresses he does, however, sell the action more convincingly and seems to throw more of himself into it.  His hesitation at first in fully participating suggests he has not yet done this sort of thing enough times to grasp its ritual power from the get-go or perhaps that this sort of thing seldom if ever enters into his own sex fantasies.

As a heel, Nelson is pretty good, directing his will to cutting slender Chris Cox down to size.  Cox is no easy victim, though, and gives as good as he takes.  Unlike the wrestlers Bard was describing, Nelson knows how to throw a convincing punch to the gut and drive his boot to the tender inner thighs.  As the match progresses he torments Cox with a grim professionalism, like a butcher taking apart a lamb.  His blank expression here is much superior to his earlier hint of a smirk.  At every opportunity, Nelson demolishes Cox with detachment and perverse (almost naive) curiosity about how much pain a body like Cox's can withstand.  He seems content, too, merely to do the job well, nothing personal against Cox, but any body worth bruising is worth bruising right.  Masculine determination and singularity of purpose are sexy in the context of a pro wrestling match, especially when one participant (Nelson) is more powerfully built and apparently more ring savvy than the other.

"C'mon, chump. C'mon," Nelson urges, like he's calling a dog to his side, while in reality he's driving the heel of his boot to the ribs of a man already down on the mat and moaning.  This frat-boy sadism, combined with one of the most perfect torsos I have ever seen, is lethal stuff.  I find it powerfully attractive, troublingly more attractive than appalling.  This he follows with "Got a few broken ribs, huh?" as blithely as if he were asking Cox for Chapstick.  "How's that feel, huh?" is a question we kinksters have heard again and again, but Nelson delivers the old line as if he's trying to break the ice with Chris, open up a conversation.  For real.

I should add here that in addition to the sounds of bodies colliding, a victim moaning, and a tormentor taunting, RHW has a music soundtrack, nothing too overbearing, the kind of low-level hum that's used in thrillers to heighten the dread and underscore that what we're watching is pretty serious stuff.  I'm not convinced that the music is necessary here, which is not to imply that it is a distraction, not at all--it works.  But Nelson and Cox--and here I speak specifically of the last half of the match--deliver their grunts and slaps convincingly, and Nelson, especially, builds up a kind of rhythm in his assaults on Cox's body--like dance, also like sex.

Nelson versus Cox is probably the best thing I've seen at Rock Hard Wrestling.  Not that I've seen everything, but I have seen a good six or seven matches.  This is Nelson's fifth RHW match and only Cox's second.  When I say that Nelson is in command of this fight from start to finish, I don't mean to imply that this is a squash job.  In fact, Nelson is on the receiving end of the punishment a good half of the match--and, by the way, the outcome is never a given.  What I mean is that, even with a few minor flaws in tone at the beginning, Cody Nelson controls the tempo and intensity of the action--does an excellent job of it, too--and seems more experienced in building the fight's story arc, insuring that every jab, wisecrack, and grunt correspond to the fight's "big picture."  So I would add Nelson's personal charisma and wrestling ability to the photography, editing, sound, and music as a reason for this match's success.  Recommended, definitely recommended.

And keep up the good work, Rock Hard Wrestling.  You are miles from where you were a year ago.  Now take my friend Bard's notes and see how much better you can be a year from now.  (Hint:  there are few wrestling matches indeed that could not benefit from a prolonged choke hold or a steel claw applied to the abs.)
Email Post
Labels: Chris Cox Cody Nelson Pictures Reviews Rock Hard Wrestling

Caught in a Trap