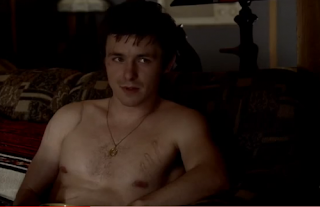 Not that I usually mind spoilers, but do not tell me how the third season of True Blood works out.  As I have not had a TV cable connection for a year now, I have to watch my current favorite HBO series on DVD, and the third season came out just on Tuesday.  By Wednesday evening I finished the third of five disks.  I'm on hiatus now because (1) I'm swamped with research papers to grade this weekend and (2) I promised to watch most of the new episodes with a couple of similarly deprived friends (and have already cheated by approximately eight episodes).

Like nearly every other gay man in America, only a year later, I am fascinated by the beautiful miracle by which werewolf Alcide Herveaux's torso diminishes from massive shoulders and pecs to what's apparently a size 31 waist.  The mean-as-a-snake werewolf Cooter can also claw my back any night of the month (full moon or not).  I even like the mincing, eye-fluttering vampire consort Talbot.  And, of course, I'm still of the opinion that Jason Stackhouse and Eric Northman need no excuse to get naked--really, they could iron handkerchiefs in the nude and I would hush anybody who dared to ask where the bathroom is.
But for me the true revelation of Season Three has been Tommy Mickens, the young roughneck whose path crosses with Sam Merlotte's while Sam is searching for his true family. (See what I mean by no spoilers, guys?  I expect the rest of you to be this good, too.)   Not that Tommy can compete with the top-shelf studs on a show that has an unbelievable grasp on what its audience wants--though I do think he is cute enough, with his puppy-dog eyes--but what nails it for me is that grinning hard glare that some guys get as the testosterone and adrenalin rise right before a fight--or even the mere possibility of a fight.   The actor playing Tommy (Marshall Allman) nails that look--and try as I might I could find no photo of it to share with you guys (the sultry look above is NOT what I'm talking about--though it's hinting at it).
Do you know what I'm talking about?  And does that look have a name?  A leer?  The evil eye?  It's like the expression you get on your face when you've got a crush on somebody, only with the incisors just a little too exposed.  I'm struggling for words to describe it.  I guess I had always thought it was one of those looks that could not be faked--but Allman's got it down pat and has called it up at least four times so far this season.  It's an intense sort of smile that's almost a grimace, but it's totally wild and brutally focused.  (An old boyfriend got it every time I pushed one of our bedroom tussles too far.  Damn, I miss that guy.)  But, let me tell you, when Tommy flashes his fight face, the tent on my crotch could only be matched if, let's say, Alcide butt-fucked Jason on top of Eric (if this happens, guys, go ahead and tell me--to hell with my friends, I'll fast-forward through the whole series to find the scene).
I culled the image below out of Skull Island's vast reserves (a screen cap I made in January from this video).  Check out the shirtless dude with the shaggy blond hair.  It's the closest I could find to the look among my stuff.  If I have to coin a new word for it, I'd dub it a fypio ("fuck yeah pussy it's on").  Feel free to add it to your vocabulary list--just tell people where you heard it first. 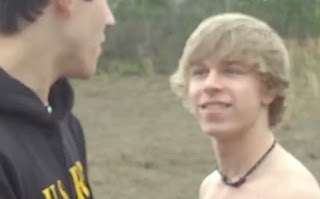