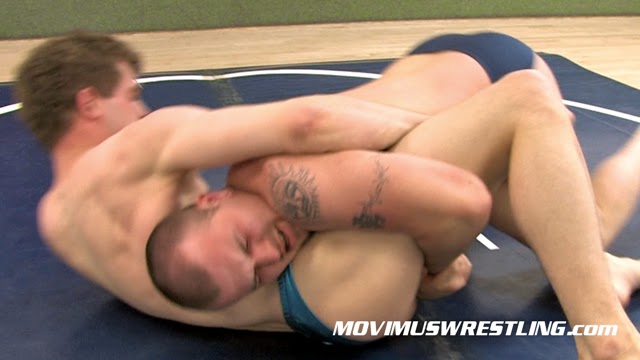 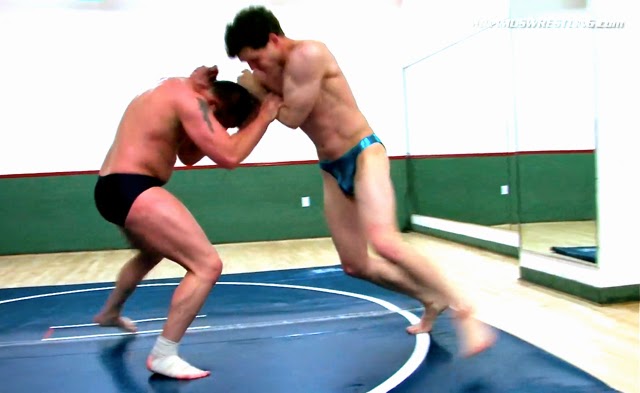 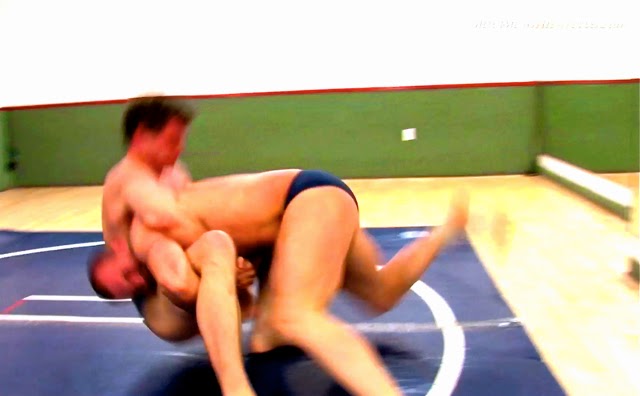 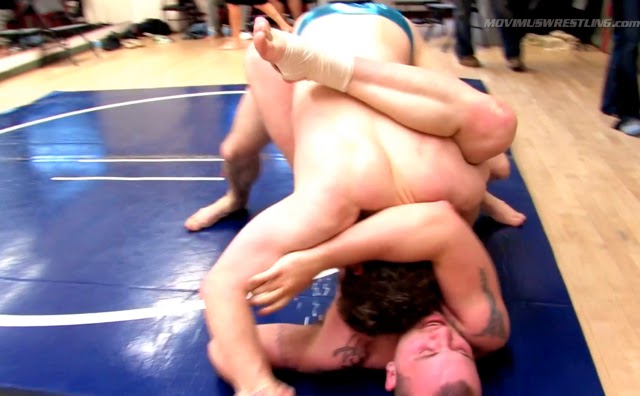 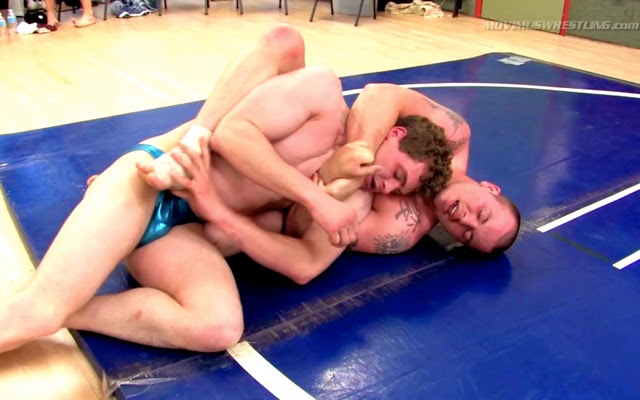 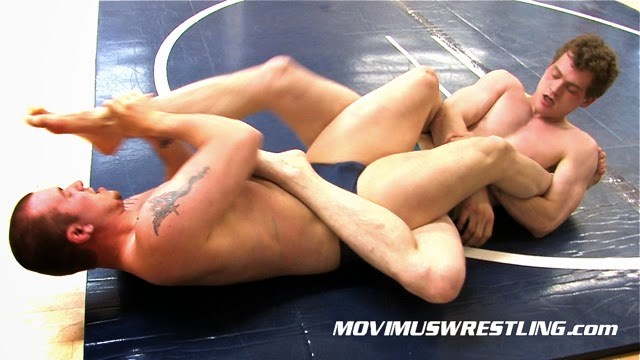 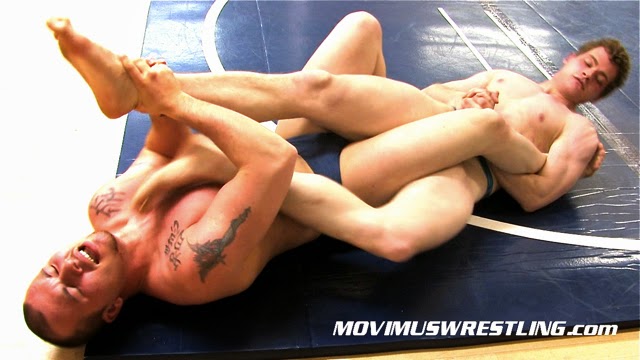 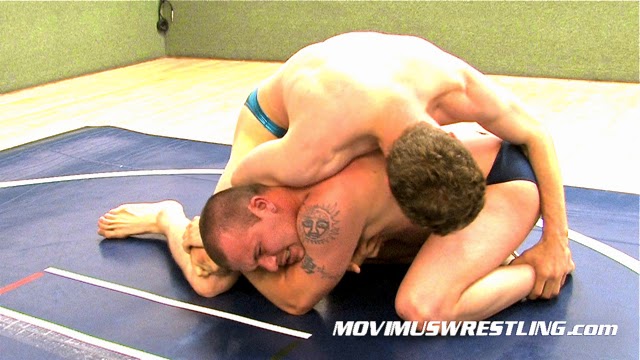 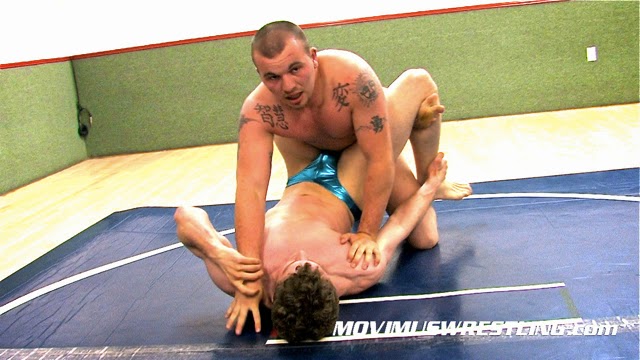 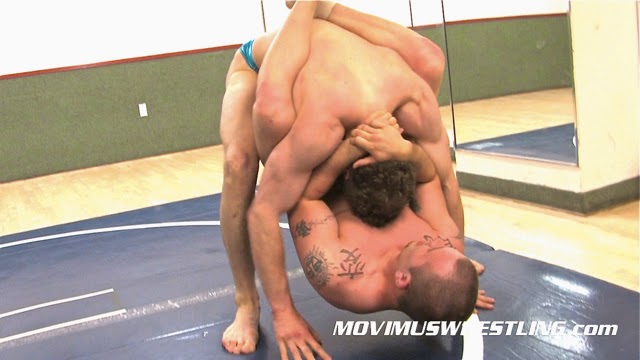 Based on Movimus's latest release--Connor Flynn versus Jayson Dolan--I suspect we may be seeing a significant tonal shift in the company's product: faster, more dynamic, more reckless. Connor and Jayson wrestle like they've got hornets in their trunks, tossing themselves and each other across the length of the mat, clear off it to the hardwood floor and against the mirrored wall.

In the past few months, more than one reader of this blog has left comments on this blog and directly to me via email, suggesting that Movimus should up the violence quotient and encourage its wrestlers to throw a gut punch every now and then. But with the way Connor and Jayson light into each other, sudden and erratic as lightning, a bare-knuckle punch to the abs might be superfluous, almost a step down from the frenzied force we are getting here.

Maybe it's just this one match, or maybe we're seeing a new style emerging at the young company. It's not just style, though. It's substance. Connor has always nursed a dark side, for lack of better words to describe it. Is "a sullen attitude that hints at sadistic undercurrents" any better? In retrospect, it seems to me that Connor has been waiting for someone with the solidity and heft that Jayson presents so he can hurl himself into the guy, throwing caution to the wind.

And given his weight, Jayson Dolan (whom we met last month in his debut against fellow Movimus newby Josh Steele) is surprisingly nimble and quick, though he lacks much of the science of mat grappling that Connor brings to the fight. It's an excitingly vigorous contest. Jayson starts off rough and overbearing from the start. Connor's best bet is to wrap his lithe body around Jayson's bulk and immobilize him. Jayson's strategy is to pound Connor into the mat. The speed and roughness cannot be compared to most of what we have previously seen at Movimus.

And then there's this whole new approach to videography. The camera not only swerves around the bodies, as it has since Movimus started shooting matches with two cameras and jump-cutting action shots from different angles, but now it swoops in on the action aggressively; at one point the bodies seem to careen towards the lens as if they will bust through the laptop screen onto my living-room floor.

My one complaint, a small one, is that, for all the pointed contrasts between the two wrestlers in body mass and style and for all its frenetic energy, this is basically a one-sided match. Not a beatdown, because the eventual victor has to work his butt off for every point he earns against a canny and determined fighter. After the first three rounds (of seven), though, it appears that one of these men has got it all over the other, despite the vehement heaving back and forth. But this quibble is nothing compared to the lasting buzz I got off this unrehearsed show of pugnacity and nerve.

What I mainly want to emphasize is the rampant brutal intensity of the competition. Like previous Movimus matches, the battle is fought fairly, demonstrating the kind of sportsmanship we expect of a legitimate sport, as opposed to horseplay and clowning around. But Connor and Jayson take everything that has typified the Movimus style thus far and pitched it up to a new level. These two don't so much lock up, shoulder to shoulder, as collide at full speed. During every minute of this match, I was thinking I was watching a new era dawning in underground wrestling. Yes, it is definitely that good!