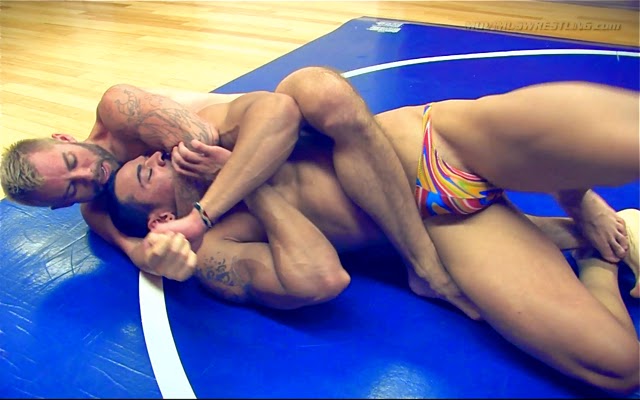 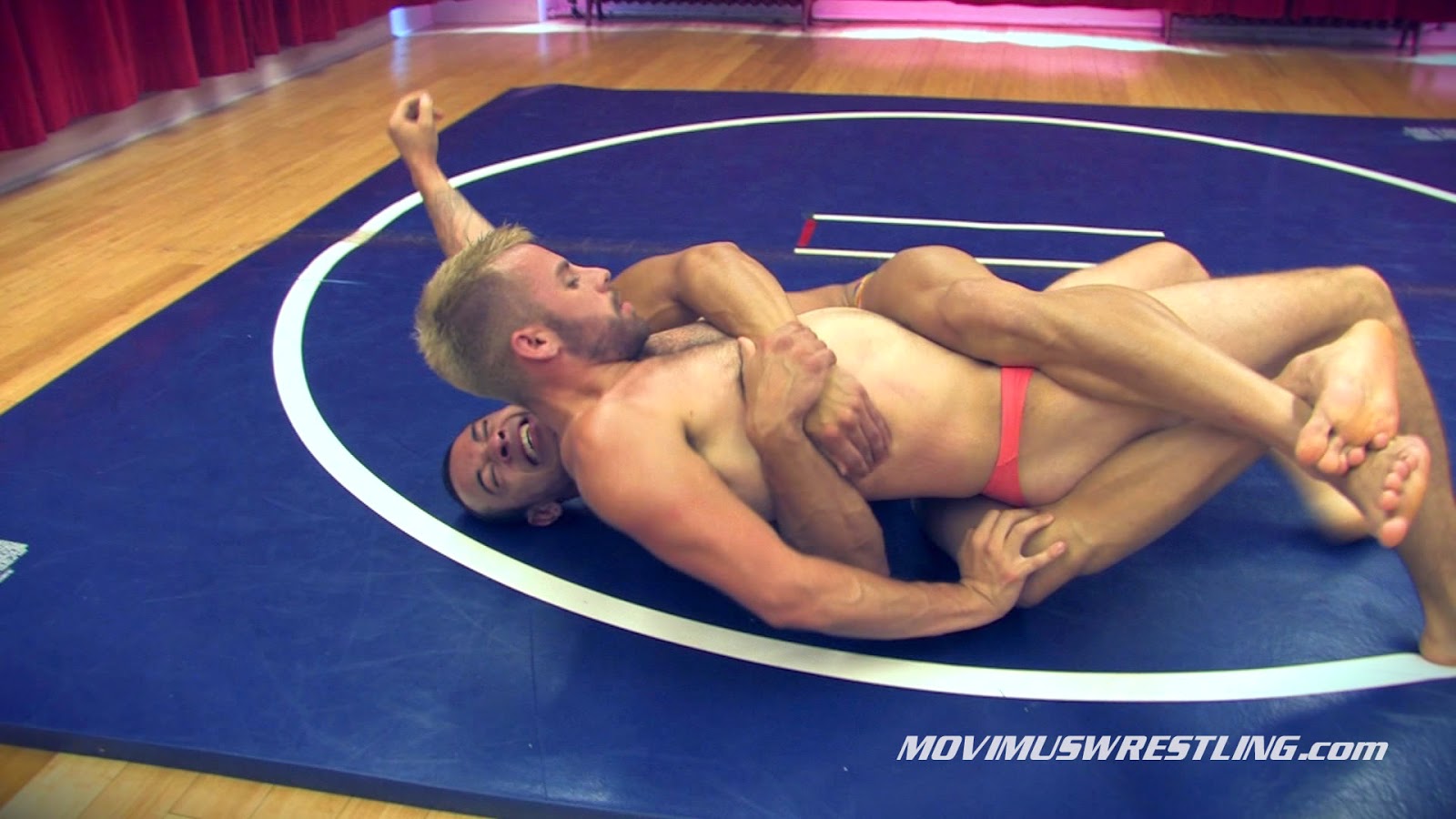 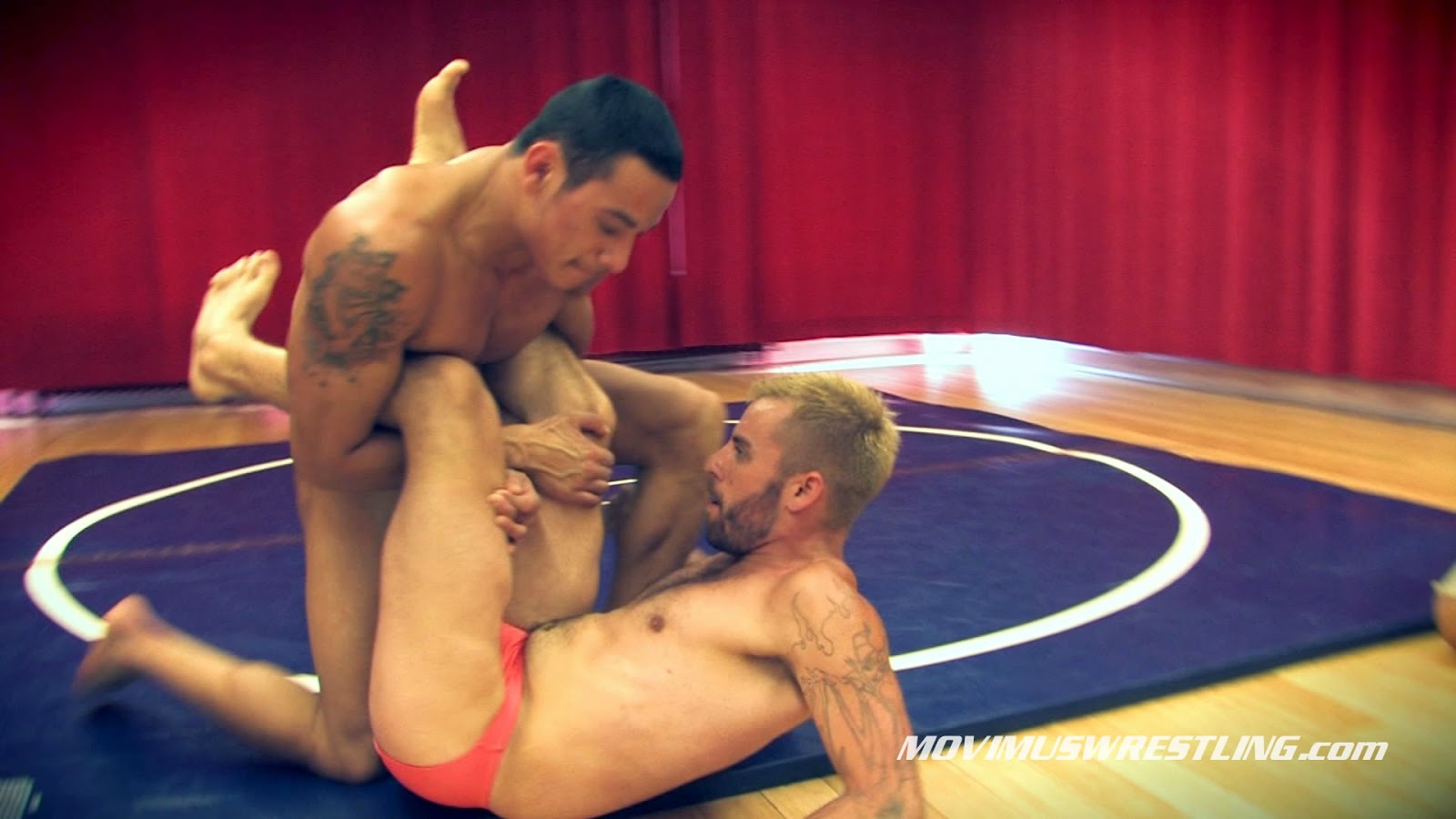 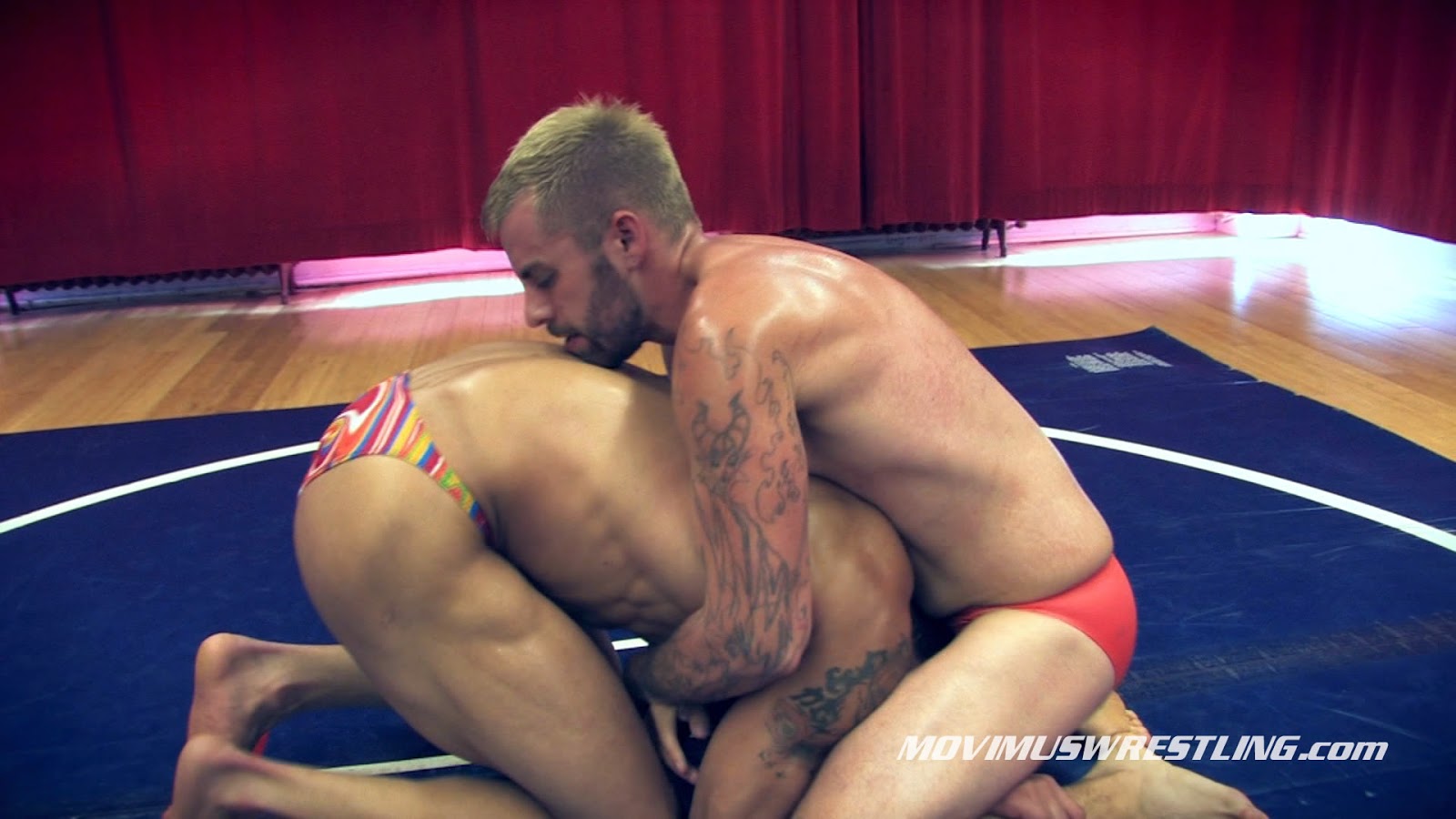 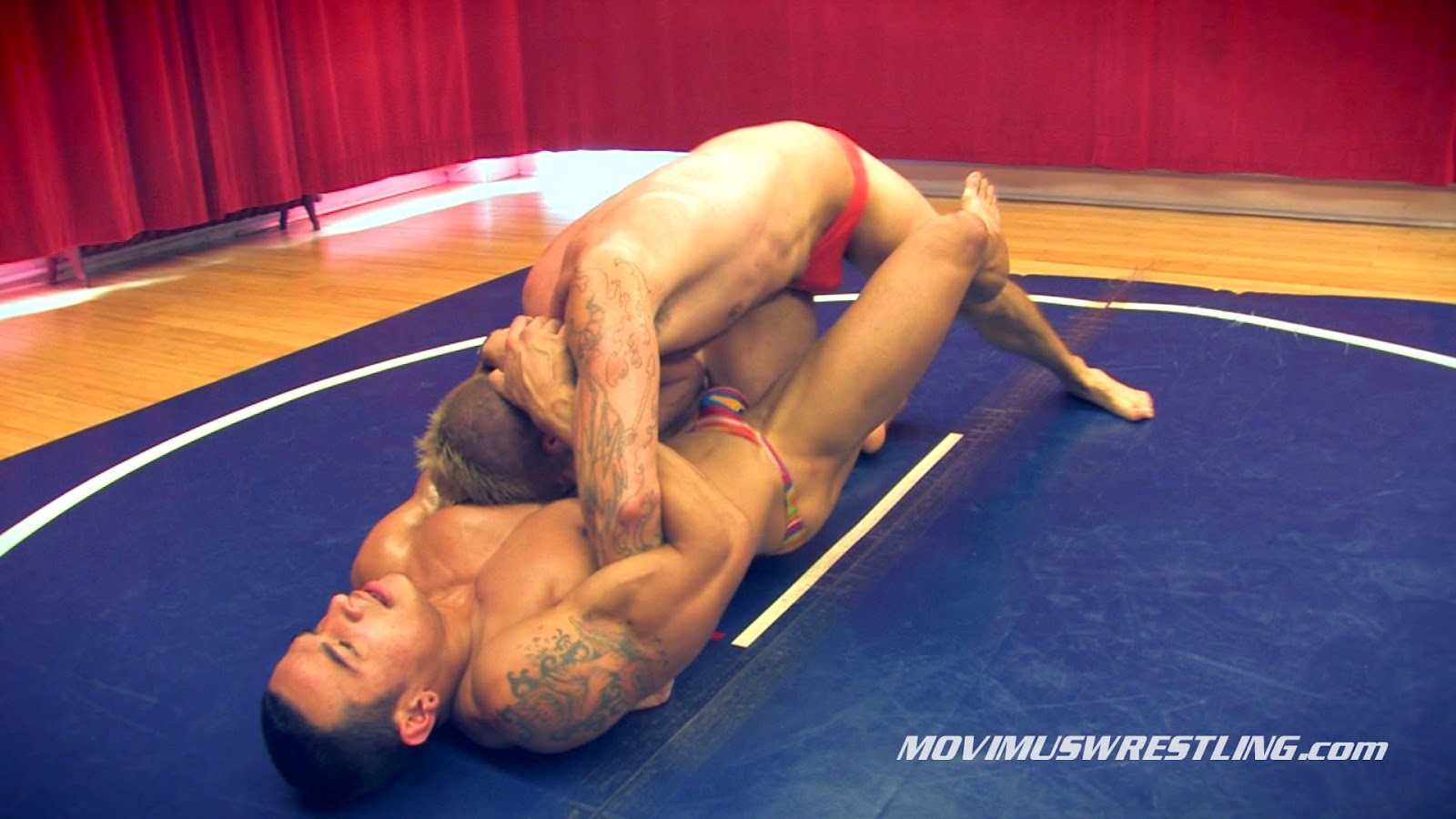 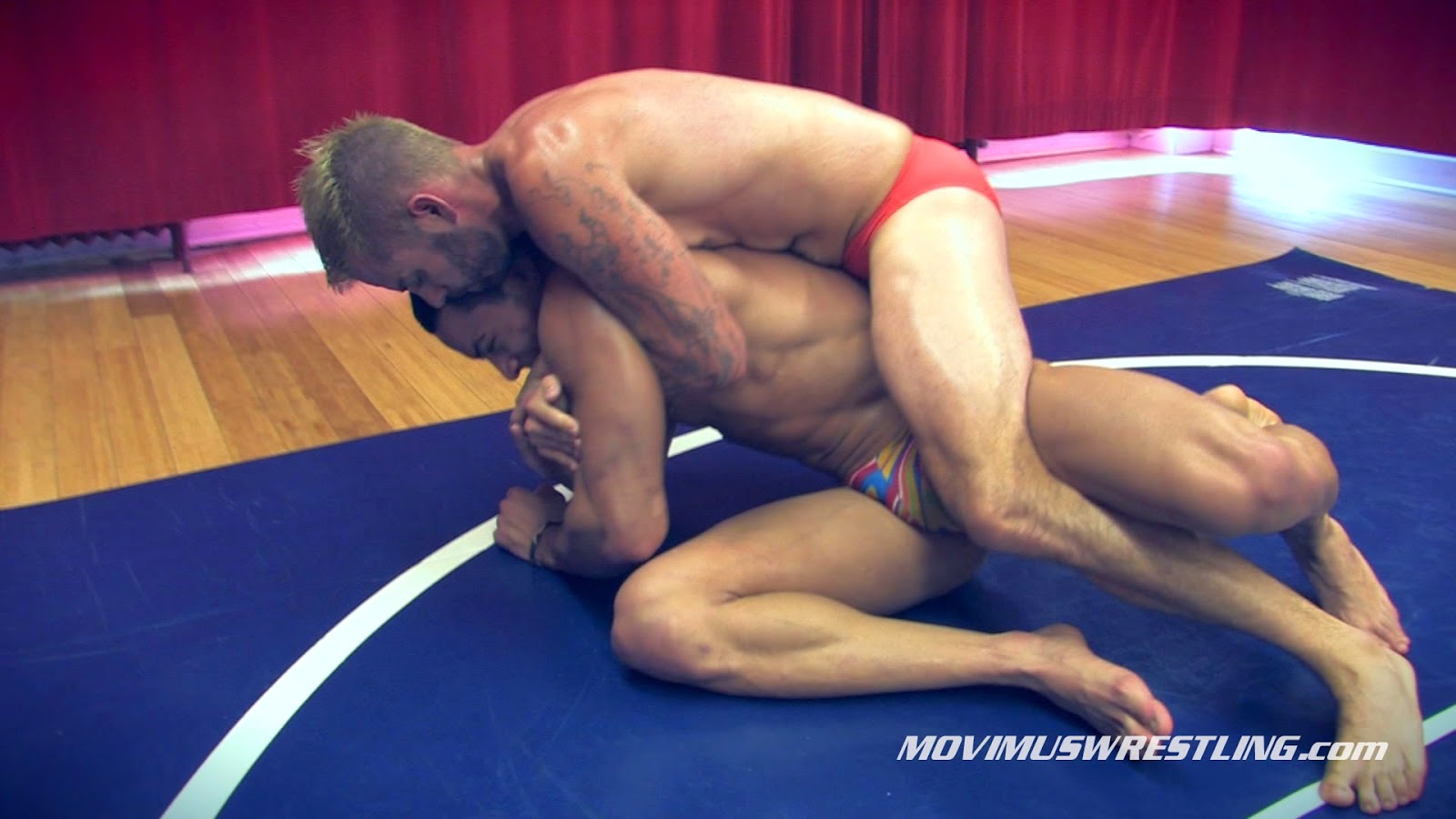 I almost can't stand how hot Dave Markus is. In its latest download release, Movimus has him in lollipop-swirl gear that could fit inside a Cheerio hole. (La Sustancia P has already honored the man for his choices in wrestling gear. I can only add an amen to that.) And he's not only pretty; he's a tough and relentless competitor, as this contest demonstrates well.

He's up against Casey Callaghan, still looking like somebody Liam Neeson shot in the last 30 minutes of some movie or other. His rough-trade styling aside, Casey is, like Markus, a seismic force on the mats and damn near impossible to tear your eyes from, especially as he and Dave bump and twist at crazy high speeds up to the first tapout, about seven minutes into the match.

Things slow down a bit after that, as the wrestlers come to terms with how well-matched they are in strength and determination. As I have said before, this is my favorite point of any match, mat or ring or backyard: the point when the two wrestlers are locked in to each other tight, nearing exhaustion, and, to put another quarter in the meter of this cliché, "fighting on instincts alone."

I'm not sure where exactly these matches are shot, but firetruck sirens and air horns from outside kick in right as the fight starts to boil over. From the sound of it, the whole building has burst into flames. And the dramatic struggle between Dave and Casey at that moment is at fever pitch. The sirens fade away, leaving us with the moans and whimpers of these two tied into a death knot worthy of a primitive trial by ordeal ... or at least the climactic scene of a good Tarzan movie.

Seconds after the 20-minute mark, the two are tied 1:1. In the match's final seven minutes, the wrestlers are clearly getting ornery. It's been a tough fight to this point, but now the two get reckless. They shove each other testily. They seize each other roughly, going for the jugular. The tensions rise to a bust-your-nut climax in which the victor suddenly shuts his opponent down.

Most pro matches staged to achieve a high pitch of drama have only half the intensity of this contest. Once again Movimus pushes the envelope on what underground wrestling is about.
Email Post
Labels: Casey Callaghan Dave Markus Movimus