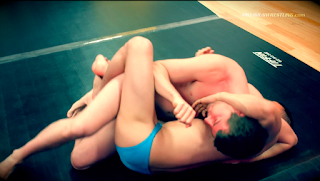 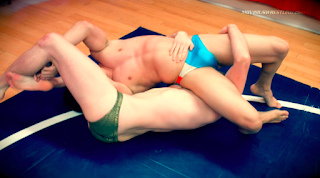 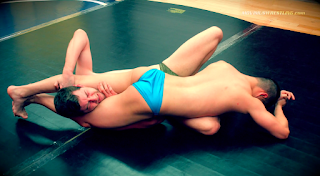 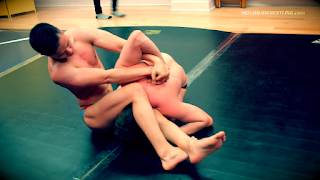 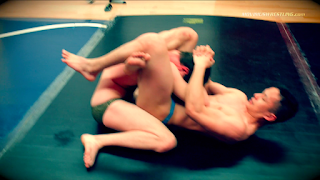 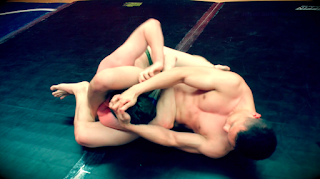 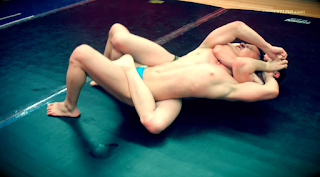 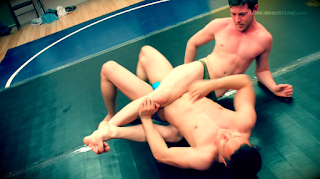 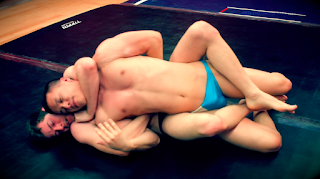 Movimus's wrestling videos of young athletes wrestling sometimes induce a lucid dream state in me. I compare them to the old (now out of business) Lets Wrestle, especially the eerily quiet matches featuring Mark Lander.

This is particularly true of the videos featuring wrestlers who don't have a lot to say. The latest release, with newcomers Steve Mason (second time) and Leo Sun (third time), glides through a two-submission match with little more soundtrack than the shuffle of bodies and the occasional moan of mild distress as one finds himself caught in the clutch of the other.

Leo and Steve are ideally matched, within an inch of either in height, within a single pound in weight. Their prowess is likewise similar. They favor the same strategies and holds. They keep the same pace. The screen  grabs above, depicting moments of exquisite paralysis, are not entirely representative. These guys play rough with each other. I could watch them contend for hours, hypnotized and yet stimulated, and indeed they seem to have the stamina for eight-hour stretches of combat.

Steve and Leo are serious athletes who clearly have acquired their skill set and discipline through rigorous training and practice. I suspect we will see rematches in the near future. I hope so. Even as I write this, an hour, almost two, since my last viewing, I am still under this video's spell.