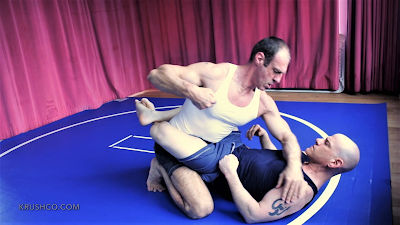 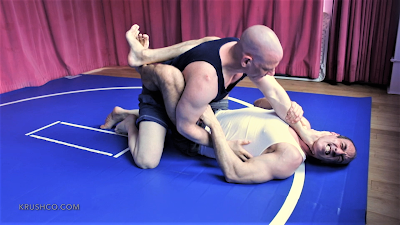 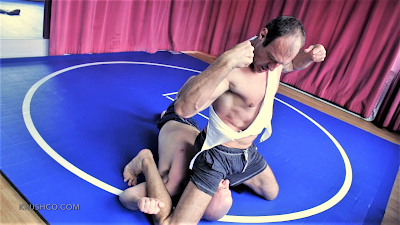 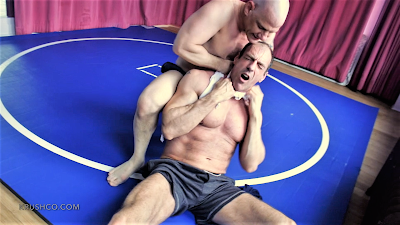 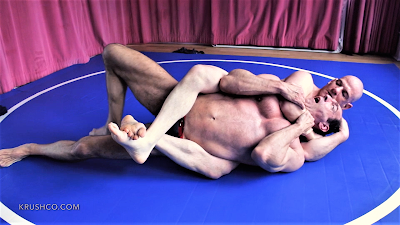 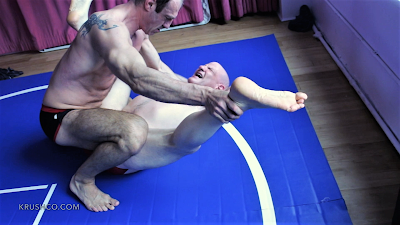 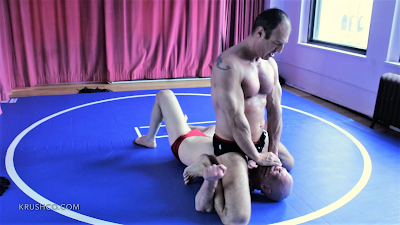 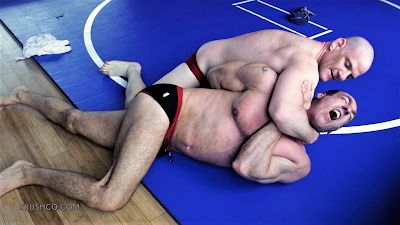 It looks like Steven made the most of his recent trip to the USA, including a stop at the Krushco mat room in New York City as part of his tour of the great North American wrestling sites. The man has good taste, I'll give him that, and balls, too. Challenging Krush to a submission match is no small matter. In the wrestling world, Krush is the K2 for mat adventurers, and evidently the fray-cationing Parisian wanted nothing but the toughest technical challenge he could find. Because the new matches are "so intense and numerous," they are divided into two parts (the two downloads priced as one, totaling 45 minutes), featuring "some of the best examples of head scissor and rear naked choke holds you'll ever see. Anywhere."

Let me second that. From its rip-and-strip opener to its climactic conquest by asphyxiation, French Fried  is relentless, authentic, and steamy, certain to be remembered (by this blogger anyway) as one of the top three of Krush's trove of matches, quite possibly his best to date. Impossible as it sounds, Krush is better now than he's ever been. Though he was never lacking in self-confidence, his moves and camera presence are more assured now, the "storytelling" more compelling, and the videography more technically accomplished than even the matches of the Krush-vs-Lucien saga, Krushco's previous benchmark. Steven compares favorably to Krush's best roughneck adversaries: Gaz, Stan Torum, Johnny O, and Lucien. Steven is a hairy-chested, man-sized grappler, immensely passionate and thrillingly vicious, the perfect foil for the fierce and hotheaded baldy.

The video wastes no time on introductions or smack talk. Steven and Krush lock up, and Krush gets the first takedown within seconds. He rides the man for a few more seconds then flips him over and up for a combination choke and body scissors. The Frenchman muscles loose and reverses. legs pinching Krush's waist, the palm of his hand pressed to Krush's nose and mouth, smothering him. Steven is big, looming over Krush when standing, and even when the two are grappling on the mat, Steven is an imposing figure. As the announcement copy states, the fight focuses a lot of attention on attacks to the head (and jugular!), elevating this contest virtually to a life-and-death struggle. Fine technique meets agonized grimaces in one of the finest competitions I've seen so far this year.